COVID-19 Status: Our office is open and legal services will continue to be made available to existing & new clients in a manner of their choosing.

Georgia dog bite laws are quite complex and distinct from other states. Because they put a relatively high burden of proof on victims, the liability laws tend to favor dog owners more so than victims. Still, victims who have suffered injuries by dogs still have rights to compensation if their case meets certain conditions. If a dog bit you or your child, you can seek financial recovery from the dog owner using one of the two ways we discuss below.

Note: This is merely a general discussion of Georgia dog bite laws; for specific information about your particular case, you will need to speak to an attorney. You can schedule a free case evaluation with dog bite lawyer Jason Schultz by calling 404-474-0804. 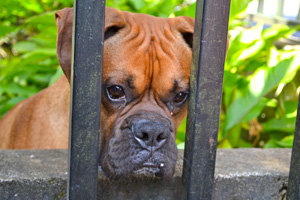 Georgia employs a modified version of the “one-bite rule.” This rule provides that victims can hold dog owners strictly liable for damages if the owner knew or should have known that her dog had dangerous tendencies. In other words, if the dog had a vicious propensity (such as having bitten someone in the past), then the owner will be liable for the victims’ damages, irrespective of negligence.

When is a dog considered dangerous for the purposes of liability? You cannot determine a dog’s dangerousness based on excessive barking or growling alone. Rather, O.C.G.A. § 4-8-21(a)(1) defines a dangerous dog as one that:

When filing a claim or lawsuit, it will be the victim’s responsibility to prove that the dog was dangerous.

Georgia adds a couple of conditions to this one bite rule, though, which we have listed in number one below. In addition, the state provides alternative grounds for which victims can seek recovery. In order to hold the owner liable, O.C.G.A. § 51-2-7 provides that the victim must use one of the following two pathways:

What kinds of proof do I need to win my case?

The types of proof you will need to show the insurance company or courts depend upon which of the above routes you are taking. If you seek recovery based on the first option, you can use proof such as:

If you want to file a claim on the basis of an ordinance violation, you will need to see if there is an applicable ordinance in your area. You can start by checking with your local government, Humane Society, or Animal Control. Your lawyer can also tell you the best way to pursue your case and whether or not there are any local laws that pertain to your case.

In addition to satisfying these basic elements, you will also need prove the nature and extent of your injuries, using evidence such as medical records, expert testimonies, photos, and an injury journal. You might also need to prove that you did not provoke the attack, a common defense owners make to avoid liability. If the owner/her attorney successfully proves that you provoked the incident, it will nullify your claim.

What is the statute of limitations for dog bite claims in Georgia? GA Code § 9-3-33

Lawmakers introduced statutes of limitation, or time limits on when you can pursue a claim, to provide defendants with a degree of protection. It would be unfair and exceptionally hard for a defendant to prepare a case after a long period of time.

Georgia Code § 9-3-33 provides that the statute of limitations for bringing a personal injury claim, such as for a dog bite or attack, is just two years. In other words, you have two years from the time of attack to file an action against the dog owner. This may seem like a long time, but it is important to get on the ball and move forward with legal action as soon as possible.

It is not in your best interest to procrastinate because:

What should my first step after a dog attack be?

After you have tended to your immediate medical needs, your first order of business should be to sit down with an attorney, discuss your options, and start implementing a plan of action to recover compensation for medical bills, lost wages, and emotional damages.

If you live in Peachtree City or the surrounding areas, contact the Law Office of Jason R. Schultz, P.C. to schedule a free consultation. Let us begin working to prepare your case so you and your family can receive the compensation to which you are legally entitled: 404-474-0804.

A dog bite is a traumatic event resulting in serious injury. Multiple deaths are reported each year as a result of the most vicious attacks. Often a bite will result in permanent scarring, nerve damage and a significant risk of infection. Call (404) 474-0804 or toll free (866) 455-4709 today for a Dog Bite Lawyer you can trust.